I almost made it.

Until two days before my return flight to England, I had not been mugged since my last update. What a wonderful swan song for South America, I thought; it would be nice to leave on a high.

Instead, I broke a new record: two mugging attempts in two days, both in the same city, Buenos Aires. So, what savage attacks did I encounter this time?

The one on the final day was a wonderful parallel of the Quito experience, albeit sans the excrement. Whilst passing by the intersection dividing Florida Av with Peru Av (one of the city’s most commercial streets), I felt a drop on the back of my neck. As I felt my (now) moist hair, harrowing memories of flying shit reverberated around my mind. Looking at my hand, the liquid was charcoal coloured. It smelt of vinegar. Suspicious of what had happened, however, I continued to walk. Those tyrants had no idea that this was my fifth mugging experience in South America. I was now a seasoned veteran. And so I remained a bastion of coolness. On cue, as two women approached moments later asking to help, I turned, stuck up my nose and continued to walk nonchalantly down the street.
I would have called this a personal victory, but once I had returned to the hostel to shower, it was clear that the result was closer to a draw. My jumper was stained, as was my bag. At least vinegar is a more pleasant scent than shit.

The other mugging experience occurred the day before this. Again, I was walking in what is considered to be a safe neighbourhood named Recoleta. It was 14:00. Without initially noticing him, a man crossed the road a short distance ahead of me and then proceeded to walk directly up to me, staring intently into my eyes. He then began espousing Spanish rabidly, occasionally touching my jumper. As I pleaded with him to let me pass, he became more forceful, before beginning to actually grab hold of me. Throughout this, he had a hand concealed within one of his pockets – this may have been incidental, but it looked more like a threat. Then, somebody at the end of the block noticed this and began shouting towards us frantically. (It later transpired that this person had noticed what was happening and was telling guy grappling me to let go). Seeing a window of opportunity to escape, I broke free from the vagabond’s grip and turned around. Fortunately, at this moment, four people were stepping out of an apartment block so I positioned myself between them. The assailant ran away.

So, the good news is that I finished the trip without any scarring. That is bar from the indelible insect bites which run like fault-lines around my legs. The bad news is that South America clearly sees me as a victim.

Mugging memoirs aside, the end of the trip was exhilarating.

From Asuncion in Paraguay, I donned my rugged travelling cap and travelling long distances in a short space of time. I boarded a midnight bus to Encarnacion which arrived at 5am; I then took another bus the following morning at 2am, which arrived in Ciudad del Este at 7am. In other words, the GDL (law conversion course) exam period was such a memorable experience that I decided to replicate my sleeping patterns during that period whilst of holiday.
Encarnacion is renowned for the Jesuit ruins in nearby Jesus and Trinidad. Indeed, they were fascinating to see, particularly the latter due to their sheer scope. Encarnacion was also memorable for the 15:00 nap I took in its central plaza. Never has a power-nap been so fulfilling.
Ciudad del Este borders Brazil and Argentina, so it was an inevitable transit point for visiting Iguazu Falls. However, it also boasts one of Paraguay’s principal attractions: the Itapu Dam. Now, it should be noted that one can boast about something without reason – just think of Mcdonald’s healthy salads for instance, or Pakistan’s outstanding contributions towards cricket. The appeal of the Itapu Dam lies within its name: it is a dam. In other words, it is a vast slab of concrete which is about as interesting to behold as a checkout line in Tesco. That it is a symbol of national pride is shame – the country’s delectable chipa bread and affable people is worthy of more merit. At least the tour was free…

I subsequently visited Iguazu Falls, both from the Argentinian and Brazilian sides. The waterfalls are nestled amidst the rainforest and the sheer array of them, varying in size and force, is salubrious. Akin to Machu Picchu, there is little point in attempting to describe the beauty of the scenery. However, it can be stated that the perspectives offered by the Argentinian and Brazilian sides are incomparable: the former is more immersive and allows (much) more time to wander whereas the latter is shorter but more panoramic.

From Iguaza I took an overnight bus to Buenos Aires where I stayed for one night before travelling on to Uruguay. However, during this stopover I went to watch the local football derby between River Plate and Independiente. The football itself was superb, but a particular highlight had to be the Independiente supporter. This gent made a gesture towards the Home Team’s fans which can only be described along the lines as ‘suck on this’. However, this man was no person to make half-witted gesticulations. He stood there looking on towards the River Plate fans with his exposed penis flapping freely in the wind. I think that this was art imitating life.
You can watch the highlights of the match, which was won 3-2 by River Plate, here:

My first destination in Uruguay was Colonia, which is a mere one to three hours away from Buenos Aires (depending on which ferry you board). It was so compacted with riveting culture that I had seen everything worth seeing within two hours. There, I also ate Uruguay’s national ‘snack’ (or so they say): 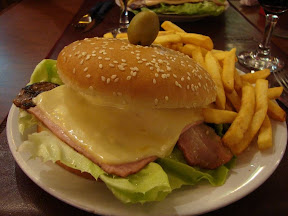 Chivitos – I think you can find Evander Holyfield’s ear in there too.

Needless to say, I felt nauseous for the following three days.

Next, I visited the country’s capital, Montevideo which with its expansive coast line and quaint downtown area is gratifying to walk around. However, it must be noted how soulless the city becomes at night: I was there the night before Independence Day, and had been informed that the street would be flowing with throngs of merry and inebriated people – come 20:00, the only shops to be seen open were supermarkets, and the people there were certainly not embracing themselves for a convivial night.

Finally, I travelled back to Buenos Aires for my final five days. The city really is as memorable and monumental as I had been told to expect. It is a wonderful and vivid dissection of numerable cultures. The nocturnal lifestyle harks to the Brazilian Samba spirit of Eastern South-America; the elegant architecture and al-fresco dining mirrors Continental Europe; the fervorous mentalities of the people living there is South American. And the food: well, the food is steak, and the steak is distinctly Argentinian.
I saw a great deal in BA, yet this was still not enough. The experience was augmented by the people I met there too – the people in my hostel were diverse, interesting and sociable, and on my final night I also met up with a lovely group of American girls studying there who I initially stumbled across in Cordoba.

Whilst there, I also saw Fuerza Bruta which translates into Brute Force. It is a physical theatre show comprised upon four episodes which are all unique and breathtaking.

More importantly though, Fuerza Bruta provides the perfect analogy for my experiences in South America. Every day was unique and exhilarating. There was also a sinister, or even ominous, aura lurking underneath it. Whilst I would not go as far to say that this lends itself to the region’s charms – for I genuinely hope, for example, that the police in Venezuela do not remain corrupt, if only for the sake of the people living there – it certainly impacts the local cultures: they are at once open, forthcoming but forceful. The scenery and landscapes are perpetually panoramic, with new vistas emerging from every new kilometre travelled. All in all, it was a great experience. And I say that despite the muggings. 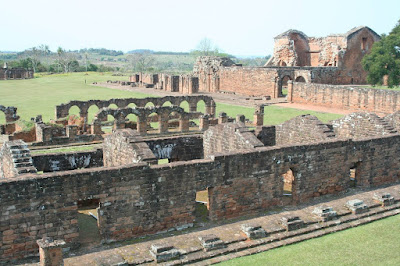 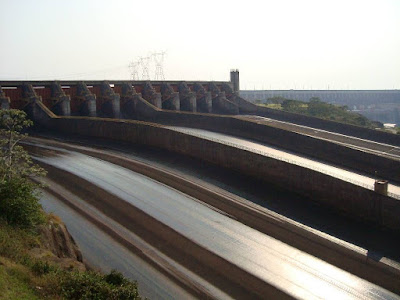 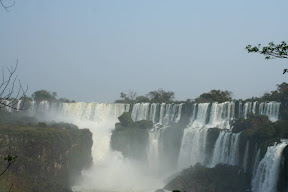 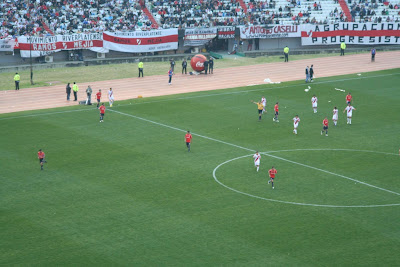 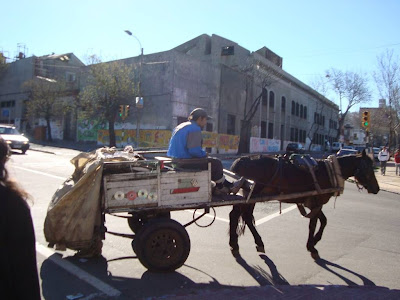 One way to collect garbage in Montevideo 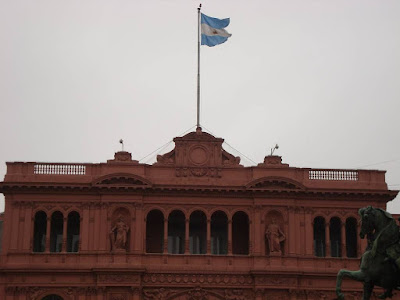 Don’t cry for me Argentina