So, Venezuela was not as dangerous as I was led to expect: I have not been murdered even once. Yet.

However, due to the constant scaremongering peddled by locals, danger appeared to lurk around every corner. And indeed, it was only a matter of time before something serious happened.

Here is the scene: I was walking alongside a busy road – something resembling a dual-carriageway – in Central Caracas. It was 14:00. The sun was glowing and there appeared to be nothing to fear.

But then two policemen spotted me. They drove up alongside me on the pavement and asked for identification. Mere routine one would expect. I showed them my passport. This obviously did not suffice as their Laurel and Hardy routine began.
The more slender officer said “trust me” whilst the fatter one searched my bag. As a general rule, anybody who asks to be trusted is not to be trusted (c.f. Gandhi). They felt every part – every crevice – of my body, in what seemed to be no other than a rapacious desire for money. How do I know this? Well, the ordeal ended with them handing me back my money – or more specifically, $3 out of $30.
Trust obviously does not translate well from English into Venezuelan-Spanish. However, I am fortunate that I emptied my wallet shortly before leaving the flat earlier in the day, otherwise I would have lost over $100 more.

Apart from being mugged by the police, I quite enjoyed Caracas. I resided with Cheryl, an effusive 30-year old translator I found on Couchsurfing. She helped me navigate the city and the overflowing metro system which gives Beijing a run for its money (having to haul both my bags on to it at peak-time was a regrettable – and forgettable – experience).
The city´s tumultuous pace during the day gave way to a languid air in the evenings. This may be interpreted as an unwelcoming sign; either way, I did not wish to find out.

Before I left England, another person named Maria from Couchsurfing told me that they were going to visit Choroni, a nearby beach town over the weekend, and that I was invited to join her and her friends. As I was quite constrained for time, I did not intend to heed to this invite. However, on my second night in Caracas, the night before I was scheduled to leave, I happened to bump into her at a Metro station (N.B. Caracas has a population of at least 7 million). I spent the evening with Maria and her affable friends, two of whom were local musicians (one claimed that he was played by John Peel before he passed away). There, we agreed that we would leave for Choroni on Friday – the following evening.

However, once I had hauled my bags to Maria´s flat on Friday (following the aforementioned ill-fated metro journey), excuses abounded about how her friend, who was driving, was waiting to receive his pay-cheque and thus we could not leave until then.
As the evening progressed it was patent that I was not going to Choroni that evening. I was told that at the very least, we would be going the following day.
That night I went out for some drinks with Maria and two of her friends. One was an actor of the fagan/antagonist sort due to his rugged bad looks. It was a pleasant night; that is, until I returned back to Maria´s flat at which point she tried her utmost to, uhm, ´court´ me. Feigning that I had passed-out, I vowed to leave the following morning. All is well that ends well.

Fortunately, Maria had no interest in joining me in Choroni either (as, purportedly, her friend still had not received his pay-cheque).

So, off to Choroni I went. I was due to arrive at 18:00, but due to a combination of the rainy weather and a public celebration of some sort, the bus finally taxied at 19:30 in the isolated darkness of the bus station. I asked a group four people where Choroni is; bemused, they told me that this was it. Kindly, however, Sofia, Eduardo, Oriana and Geoffrey told me to follow them. Together we walked into the centre of the town where there was a teeming nightlife, resplendent with bellowing music. As my course had already been set though, I followed them on to a small motor-boat heading to Cepe, a quieter beach some twenty minutes away.

The journey there was one of my most memorable. I tried to explain to the entourage that I feared the combination of small-boats and darkness following my near-death experience in Varanasi, India whereby the manually-rowed boat was flung like a kite in the torrid waters. The waves here were no less forgiving. The boat dipped and crashed on the waves making it impossible for anybody to stay sat on their seats. I would suggest this as a new attraction at Blackpool Pleasure Beach to aid the park´s ailing fortunes, but it would not be legal (no, not even by the Pleasure Beach´s standards).

Once at Cepe we swam in the warm sea where the waves reached over five-feet high. Afterwards we sat talking around three candles Sofia had implanted into the sand. Then, when we all began to tire, they somehow fitted me into their four-person tent.

In the morning, knowing I was short of time, I left the group and visited another nearby beach town named Chuao. Chuao is renowned for making Venezuela´s finest chocolate. I treated myself to chocolate ice-cream and cake for breakfast; this is treading down a perilous path, I know, towards trying a Dixie´s Chicken in Manchester, but I think I can justify this on the grounds that I am in another country.

That evening I took a night-bus to Coro. However, rather than arriving at 4:30am as expected, it arrived at 2:00am. I took a taxi to from the bus station to the centre of the town where the Posadas (guesthouses) are located. Every one was closed. There was not even the faintest sign of life.

Exasperated, I returned to the bus station where I fell asleep. The good news is that I woke in the morning with my bags (although, I had instinctively wrapped my legs around them during the night). I returned to the centre in the morning and left my bags at the Casa Tun Tun posada. If anybody from Google had searched for Casa Tun Tun and is reading this, stay there: the owner is kind and helpful, and the rooms looked to be in good condition.

Coro itself was fairly languid. As it happens, I was there on Simon de Bolivar day (i.e. Independence Day), so whilst there were a few public processions taking place, most of the shops and stalls were closed.

In the evening I boarded another night-bus, this time to Merida. It started off badly as it played the opening jingle from a crass and suicide-inducing film named Marmaduke on repeat for at least half hour. Once that eventually resided I fell asleep and woke at 7:00am at Merdia´s bus station.

Merida is a university city with the accompanying liberal aura. It is engulfed by the Andes mountains; whilst I could scarcely see them when I first arrived due to thick cotton-wooled clouds, by the end of the evening the mountains began to emerge and it was a beautiful sight to behld.

In Merida I watched the Uruguay v Holland match at a local bar (a great game and a fair result I thought). More importantly, I went to Heladeria Coromoto which is the World Record Holder for featuring the most flavour´s of ice-cream. I decided to taste the rice-krispies and salmon flavours (just to spite you JK, AJ and Ros!). I am unsure whether it is a cause de celebre that the salmon flavour tasted of, well, salmon.

Tomorrow I am crossing into Colombia. Here is to hoping that I am not kidnapped…

So, what is my overall opinion of Venezuela? I think that a drawn-out metaphor is appropriate.
On the buses I boarded, music continously pulsated at a deafening volume. The music came in two forms. First, there was the Reggaton. This gives you an impression of what it sounds like:

In short, it is dreadful. The lyrics are also supposedly highly Misogynistic. As Geoffrey from Cepe explained, Reggaton is the result of a culture where sexual expressions have been restrained (if there was ever another reason to celebrate the advent of the pill, this is it).

Salsa is the other type of music perpetually played on buses. This is overloaded with exuberance; it is sensual but jovial.

So, reggaton represents the ominous side to Venezuela. It is pervasive and ugly. It is Machismo personified. However, I did not meet a single person who actually liked the bastardised form music. Conversely, most people and places I encountered were akin to Salsa. They smiled, laughed and had a genuinely friendly disposition. There was always a helping hand whenever somebody overhead me mumble “no hablo Espanyol”.

Let´s hope that the existence of Reggaton does not undermine the Salsa.

P.S. I forgot to bring the card reader for my camera. Hopefully I will find one in Bogota and upload my pictures in due course.
P.P.S. Comment by scrolling to the bottom of the page after either clicking the title to this post or by clicking HERE. 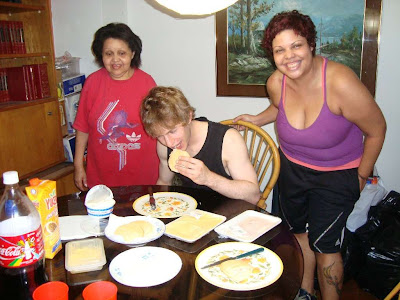 Cheryl, her mother and Robbie 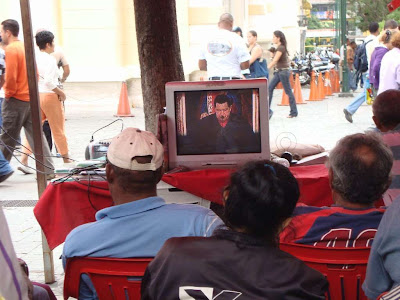 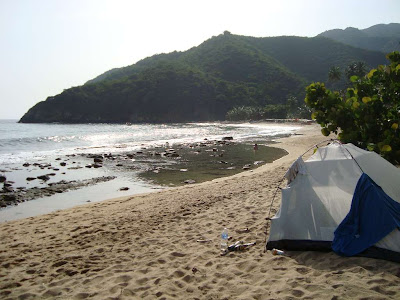 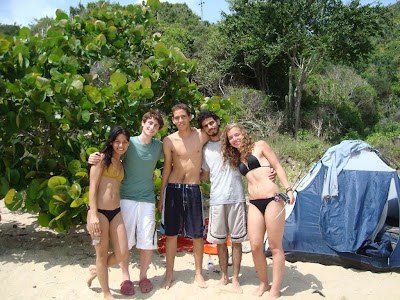 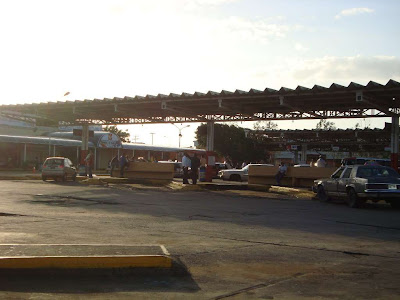 My lodging in Coro 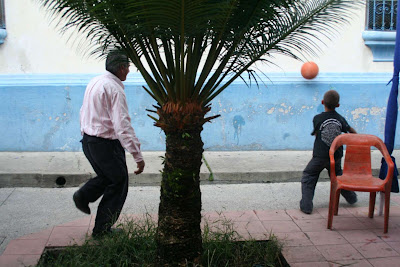 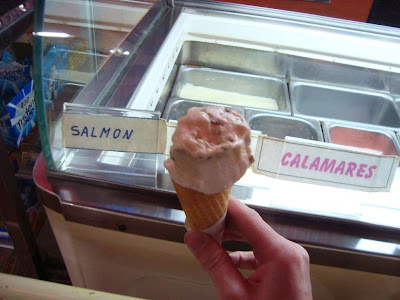 I kid you not 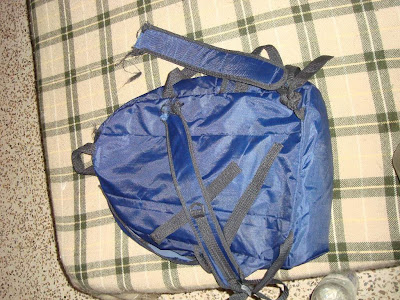 Other pictures can be found at the link below: